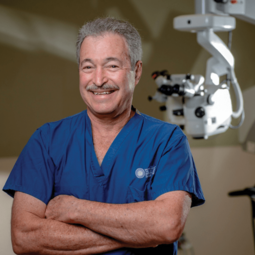 Robert Osher completed his residency at the Bascom Palmer Eye Institute and three additional fellowships in Miami and at the Wills Eye Hospital in Philadelphia. He returned to Cincinnati where he joined his father in a small private practice in 1980. As Medical Director, he built CEI into the largest private ophthalmic group in America. In the early 1980s, he limited his practice to cataract surgery, modifying the phaco machines from two fixed settings to the first surgeon-controlled parameters introducing an operation he called Slow Motion Phacoemulsification.

Osher was able to challenge Charles Kelman’s five contraindications to phaco, presenting the first series of mature cataracts, small pupils, and loose lenses. He pioneered the concept of refractive cataract surgery by combining Astigmatic Keratotomy with phacoemulsification, the first technique for reducing pre-existing astigmatism as well as introducing Hyperopic Clear Lensectomy. In 1982, he organized the first Video Symposium of Challenging Cases & Complication Management at both EIIC and AIOIS, an educational innovation that he brought to 60 countries. In 1983, the Osher-Fenzl IOL was offered by every company as the design that facilitation the transition from ciliary sulcus to capsular bag fixation. That same year, he shocked the ophthalmic world by demonstrating how to implant a posterior chamber lens into a torn capsular bag, when the anterior chamber lens was the gold standard. He also championed the separation of infusion from cutting during anterior vitrectomy. In 1984, he introduced the Audiovisual Journal of Cataract & Implant Surgery, the first video journal in Medicine, and has remained the Editor for 35 years (now the VJCRGS).

In America, Osher pioneered and published his experience with the CTR, the first series of prosthetic irides, the capsular dyes, HealonV, the lasso suture, reopening the capsular bag, the black IOL, the Malyugin ring, the small aperture IOL, registration for aligning toric lenses, and microcoaxial phacoemulsification, which remains the standard of care today. He has published more than 400 videos and peer-reviewed articles, developed more than 75 surgical instruments, delivered more than 50 named lectures, won more than 30 awards at the American and European Film Festivals, and authored or contributed to more than 20 textbooks in the field of cataract surgery. In 2010, Osher founded Cataract Surgery:  Telling It Like It Is! the second largest cataract course in the United States. The ASCRS has given Osher its two highest awards, the prestigious Binkhorst Medal and the Innovator’s Award. He also has received the Lifetime Achievement Award and the Kelman Award, the highest honor given to a cataract surgeon by the AAO.

This year we have 50 of the best inventors, mentors, emerging leaders, surgical pioneers and champions of change. With our “Five Top Tens,” we hope to showcase the best, the brightest, and the most forward-thinking that ophthalmology has to offer.