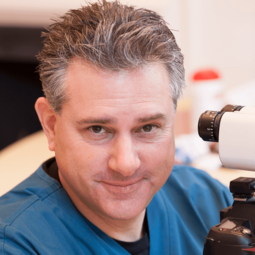 First,  I wish that on waking next Monday, everyone in the general population who wears contact lenses and spectacles will instantly know all the scientific facts about the safety, side effects and long term stability of corneal refractive surgery.

Second, I wish that on waking next Monday, all ophthalmologists instantaneously know all the scientific facts about the relative safety, efficacy, side effects and long term stability of PRESBYOND Laser Blended Vision compared to Clear Lens Exchange with multifocal IOLs for presbyopic patients with no cataract.

Third, I wish that John Coltrane and Miles Davis were still alive so I could have given them the gift of presbyopic corneal laser eye surgery, PRESBYOND Laser Blended Vision as I have done for many of their band members!

The most serendipitous moment of your career…

Towards the end of 1991, while working as an unpaid research fellow in Jack Coleman’s ultrasound lab at Cornell University, I became the first person to accurately measure the corneal epithelium in vivo in three dimensions with a 60 MHz very high-frequency ultrasound probe. I was literally euphoric to find that no one in the department thought it was of any real clinical use – not until in mid-1992, I received a call from Stephen Trokel at Columbia University the day he received some printouts of the rabbit cornea ultrasound scans clearly resolving the epithelium. The conversation with him went something like:

“****, I’m sending a patient over to you tomorrow to be scanned.” Within 48 hours we had cleaned and vacuumed all the rabbit hair out of the lab, and were scanning Phase II FDA PRK study subjects who were showing topographic “central islands” and had no means of diagnosing the cause. This launched my career and was to be the first of a long string of mysteries solved by what has become the Artemis Insight VHF digital ultrasound scanning technology and the catalyst for my clinical research and surgical career in refractive surgery.

The most unexpected turn your career took…

They say “success is built on failure.” In 1999-2001, I spent two years as Chief Medical Officer and Medical Director of the world’s very first corporate LASIK chain – LASIK Vision Canada (then LASIK Vision Corporation) – which grew to 30 clinics and 60 surgeons, performing 100,000 procedures in one year. However, the business model collapsed due to poor financial controls and, one day,  everything was shut down overnight. Following the collapse of LASIK Vision, because of the standardization and surgeon training track-record I had developed, together with my epithelial remodeling knowledge from VHF digital ultrasound, I was contacted by Carl Zeiss Meditec to move to Europe and work closely with the engineering team on the medical aspects of the excimer laser they were developing, which eventually became the MEL 80/90. The move to Europe resulted in my setting up my private practice, the London Vision Clinic, in 2002, which now is a very busy clinical practice where we are able to continue clinical research, and diagnostic and therapeutic technology development, having published over 150 peer-reviewed papers since 2005, and a text-book on SMILE.

From ocular oncology to tackling neglected diseases, our 2020 Power Listers are making their mark on ophthalmology – and beyond.