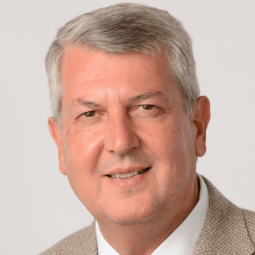 Piece of advice would you give to your younger self?

In retrospect, my career seems to have been carefully planned, with happy and productive phases in Malta, then Scotland, then England, then California, and now England again. In reality, I just had to adjust to change as it happened. So my advice would be to prepare for whatever opportunity unexpectedly presents itself so that you can make the most of it before it is gone.

The funniest moment of your career?

There have been many, but one of the most amusing is my accidental discovery of a novel brachytherapy dosimetry for choroidal melanoma, shortly after I started my career in ocular oncology. At a conference in Florence, in the mid-1980s, I heard a German opinion leader expound his technique, which I followed ever since, to good effect, with well over a thousand patients. About 30 years later, while chatting about our methods, he told me how much he admired my dosimetry as it was so clever and effective. When I said I was only following his advice, he replied that he had never even thought of that approach, let alone advocate it. I had completely misunderstood whatever he had said at that conference in Florence, thankfully.

The most unexpected turn your career took?

The most unexpected turn in my career occurred when the medical school in Malta closed down just during my final exams in 1977. The lecturers and examiners had gone on strike in protest against government “reforms” and were all sacked. After several months, when the school failed to reopen, the Medical Association of Malta and the British Medical Association arranged for the entire class to come to London to sit for the Conjoint Diploma, organized by the Royal College of Surgeons of England and the Royal College of Physicians of London.  After qualifying, I applied for more than 40 house officer posts, without a single interview. Fortunately, my friend Paul, a junior doctor at Glasgow Royal Infirmary, heard of an unexpected vacancy at his hospital and, as they say, the rest is history. I was so fortunate to have met Paul a year earlier at a beach in Malta, where he had gone on holiday as a medical student. If I had not gone sailing that day…

From ocular oncology to tackling neglected diseases, our 2020 Power Listers are making their mark on ophthalmology – and beyond.