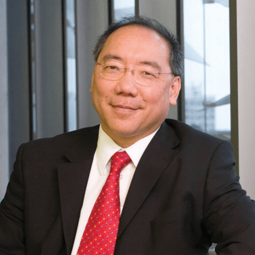 Professor of Glaucoma and Ocular Healing at the UCL Institute of Ophthalmology, London; Fight for Sight Ambassador, and Director of the NIHR Moorfields BRC.

Peng Khaw is one of the most prominent glaucoma surgeons in the world, having pioneered numerous treatments, surgical techniques and anti-scarring regimens that are now used around the world. His team’s work led to the introduction of intraoperative antimetabolites, and he introduced the Moorfields Safer Surgery System, something that’s dramatically reduced bleb-related complications. He has continued to refine surgical techniques; his introduction of new approaches – such as adjustable sutures of scleral flaps following trabeculectomy –  has helped many glaucoma specialists safely titrate IOP reductions after surgery. He and his team are at the forefront of investigations into the metabolic aspects of glaucoma, the understanding of which is already beginning to explain the symptoms patients with glaucoma report, and is hoped will help identify new therapeutic avenues for the treatment of this pernicious, vision-robbing disease.

Khaw was involved in raising £100 million to fund not only research work, but the building of new clinical and research space, including the Moorfields’  International Children’s Eye Centre, and a translational research clinical center to “fast track” new glaucoma therapies. Khaw was knighted in the 2013 Queen’s Birthday Honors list for services to ophthalmology, one of only two ophthalmologists to receive this honor in the last century.