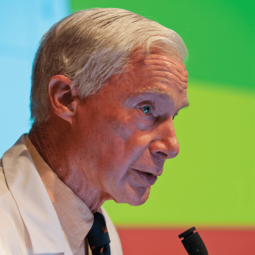 George Spaeth discovered the disease homocystinuria as a resident at Wills Eye Hospital, and published much of the early work on the condition, including the use of pyridoxine as a successful treatment. He developed methods of describing the anterior chamber angle, the optic nerve head (The Disc Damage Likelihood Score), and detecting visual loss (SPARCS), that are clinically more useful than other systems.

With over 420 published articles, over 100 book chapters, 200 editorials and 18 books, his surgical texts are used in many countries around the world. A founding member and first president of the American Glaucoma Society, he was also a founder of the Glaucoma Service Foundation to Prevent Blindness, and served as chair of the Ethics Committee of the American Academy of Ophthalmology.

Spaeth has presented over 30 named lectureships, which he uses as an opportunity to present his views on the importance of individualizing patient-driven care and helping patients celebrate their lives. A busy practitioner, teacher and investigator, he has been recognized by awards from Greece, Poland, France, and the UK, including the Weisenfeld Medal from ARVO, and the Albert Schweitzer Leadership Award (something that he has in common with Ronald Reagan, George H.W. Bush, Madeline Albright, Hillary Clinton and Mikhail Gorbachev, to name but a few).

Outside of his work, Spaeth is an emeritus member of the Board of Directors of the Pennsylvania Ballet and the Philadelphia Bach Festival, and enjoys being with his family and loved ones, being creative (playing the piano or organ, gardening, writing, composing music, flower arranging, cooking) and celebrating the gift of life.

A nominator said... “An inventor, entrepreneur, and great mentor in the field of glaucoma.”