Setting Our Sights on Diabetes

“I specialize in diseases of the retina, including diabetic retinopathy (DR). When I started my career, definitive benefits of laser treatment for diabetic macular edema (DME) had just been reported in 1985 by the Early Treatment Diabetic Retinopathy Study Group. There were no substantial improvements in treatment until publications regarding anti-VEGF therapies for DME in 2010 followed anti-VEGF for proliferative diabetic retinopathy in 2015 by the NIH-sponsored DRCR Retina Network, which I was fortunate to Chair from 2006 through 2012.”

Andrew Schimel is a retina specialist at the Center for Excellence in Eye Care in Miami, Florida, USA. He has published numerous peer-reviewed papers and book chapters.

“I have been researching, diagnosing and treating patients with diabetic retinopathy in both academic and private practice settings for over 10 years. The changes that we have seen in this field over such a short period of time are remarkable. When I began 10 years ago, I often operated on three or more patients a week to repair complications from diabetic retinopathy, whereas now I may operate on one such patient every few weeks. And that’s because our treatments have moved us from the operating room to the clinic, and our understanding of disease and our armamentarium has rapidly expanded and improved. This is a very exciting field – especially right now.”

Heeral Shah practices ophthalmology at Ramesh R. Shah in Joplin, Missouri, USA, specializing in retinal diseases. She is a co-founder of the International Society for the Advancement of Medical Retina.

“I practice in southwest Missouri, in a smaller city surrounded by a multitude of farming communities. A large percentage of our patients have uncontrolled diabetes, and are uneducated in the disease process. Though they have implicit trust in their doctors, keeping appointments and medical compliance is an issue. Therefore, we find ourselves treating diabetic retinopathy aggressively to prevent vision loss.”

When Nothing Is Normal

November Issue of The Ophthalmologist 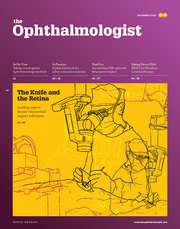