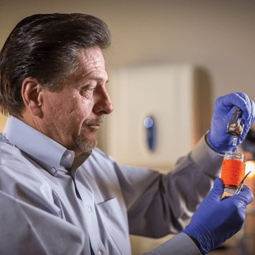 Hageman joined the Moran Eye Center in 2009, bringing with him the largest known research laboratory transfer in the university’s history – 8,000 human eyes donated for research over his career. He and his colleagues have generated a definitive body of evidence that implicates a role for immune-mediated processes, specifically that of the complement system, in AMD pathogenesis and progression. Early pathobiologic investigations of eyes from human donors led to the identification of numerous complement proteins, complement activators, and complement regulatory proteins in drusen, the hallmark pathological biomarkers of the disease. More recent genetic studies led to the discovery that common variants in several complement genes confer significant risk for, or protection from, the development of AMD late in life. A former director of the Human Genome Project called this breakthrough, “The first major translational research discovery to come from the Human Genome Project.”