Thanks to European approval of a new indication for Lucentis, preterm infants with ROP finally have a pharmacotherapeutic option

Infants born with retinopathy of prematurity (ROP) – incomplete blood vessels in the retina – are at high risk of blindness-associated complications such as macular edema and retinal detachment. The disease is rare, but even so there are tens of thousands of ROP patients worldwide. Historically, treatment of these infants has been limited to laser-mediated ablation of abnormal retinal blood vessels; unfortunately, this inevitably results in damage to healthy tissue.

In recent years, the standard of care has been increasingly supplemented with off-label use of anti-VEGF drugs; the theory is that VEGF inhibition will suppress growth of abnormal vessels in the retina. “We’d seen reports (1) that suggested this approach seemed to be rather effective in ROP patients,” says Dirk Sauer, Development Unit Head, Novartis Ophthalmology. “We thought we should do a proper trial to assess anti-VEGF efficacy and safety in this vulnerable population.” Accordingly, Novartis sponsored the RAINBOW study, a randomized controlled trial which compared ranibizumab (Lucentis) with the laser ablation standard of care. The result? RAINBOW confirmed that ranibizumab is safe and efficacious in ROP patients (2): in fact, patients treated with this anti-VEGF product were about twice as likely as laser-treated patients to have a positive outcome. Also, many more ranibizumab patients (80 percent) than laser patients (66 percent) responded very well to their treatment, although this effect just missed statistical significance (p=0.0254). The anti-VEGF approach has other advantages too. “Importantly, ranibizumab doesn’t destroy healthy tissue, which is probably its most significant advantage vis-a-vis laser therapy,” says Sauer. By inhibiting the growth of abnormal vessels without damaging healthy tissue, Sauer suggests, the drug may achieve the goal of allowing normal development of visual function in ROP patients.

RAINBOW has now led to European approval for Lucentis use in preterm infants for the treatment of ROP with zone I, zone II or aggressive posterior disease, making ranibizumab the only approved pharmacological therapy in this indication.

So ROP patients in Europe at last have another treatment option: but what about the rest of the world? Sauer states that Novartis is seeking approval in other territories, including Australia, Canada and Switzerland; the intent, he says, is to achieve the same global reach for the ROP indication as Lucentis has for its other indications. A key question remains regarding the long-term benefits of anti-VEGF in ROP patients, and in this regard Sauer notes the five-year follow-up associated with RAINBOW: “We’ll check the visual function of patients as they get older – our hope is that ranibizumab will be associated with better visual function development than laser, especially in the 80 percent of ROP patients who responded well soon after treatment.” Final follow-up data should be available in 2023, notes Sauer, adding that interim data available to date suggest that the ranibizumab benefit is maintained for up to three years. Another question relates to the role of VEGF in normal development – might there be safety concerns relating to use of anti-VEGF therapy in young children? “We’ll check other aspects of the development of these patients but we’re not expecting any issues,” says Sauer. “Systemic exposure to intravitreally administered anti-VEGF is really very low, and so far has shown no effect in terms of normal VEGF levels.” 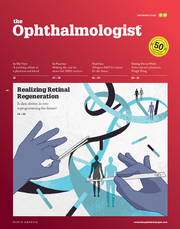