The Thinner, the Poorer

One of the many challenges associated with Alzheimer’s disease (AD) is timely identification and diagnosis – the earlier the disease can be caught, the higher the potential to prevent, or slow down, its progression with interventions like brain training or nootropic drugs. Retinal exams might be the answer, and already multiple research groups are investigating their diagnostic potential: a team from the University of Minnesota are evaluating retinal non-invasive hyperspectral endoscopy to look for signs of amyloidopathy in a mouse model of AD (1), and another group at the University of Waterloo in Ontario have shown that ß-amyloid deposits in neural retina can be detected non-invasively using their polarized light microscopes (2). But this isn’t the whole story: results from a large cohort study (3) have shown that retinal nerve fiber layer (RNFL) thinning is significantly associated with poor cognitive function, which immediately suggests that regular retinal thickness measurements could represent an important method of catching early signs of the disease. 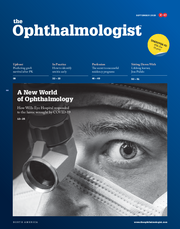