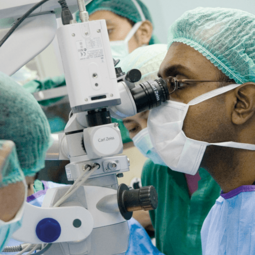 Ambati holds the distinction of being the world’s youngest person to graduate from medical school – at the age of 17 – and since specializing in ophthalmology, has gone on to receive many awards, including the Ludwig von Sallmann Clinician-Scientist Award from the ARVO Foundation in 2014, and in 2013, the Troutman-Véronneau Prize from the Pan-American Association of Ophthalmology. Asked why he chose the career that he did: “At 4, I was burned on both legs and underwent three surgeries in three months. Seeing the doctors and nurses was formative, and a love for biology flowed into medicine.” He devotes several weeks per year to volunteer work, including overseas missions with ORBIS, a nonprofit organization with a Flying Eye Hospital, and he hopes to support the opening of an eye clinic in India too.

His research focuses on the development of implants for drop-free cataract surgery and 6-9 month release anti-VEGF therapy for AMD. His biggest achievement? “Demonstrating that sVEGFR1 keeps corneas free of blood vessels laid the foundation for understanding photoreceptor avascular privilege, and for a new class of intracellular anti-angiogenics.” And his advice to those wishing to succeed? “Stand in the shoes of patients, students, mentors, staff, family, and colleagues. Give back in research, service, teaching, or policy.” Given the chance, would he have chosen a different career? “No way! Where else could I do transplants, prosthetics, lasers, overseas work, and research? Restoring vision is a miracle.”

A nominator said: “Ambati was the first to describe use of bevacizumab to treat corneal transplant rejection, and he has developed key surgical innovations including the technique of posterior endothelial rotational lamellar keratoplasty (PERL-K) as a non-transplant treatment for Fuchs dystrophy. He is president of iVeena, an ocular drug delivery device company and developers of the iVeena capsule drug ring, which has the capacity to serve as a versatile platform for treating macular degeneration, glaucoma, and other diseases by sustained release of multiple drugs from within the lens capsule. This will mark a major advance over the use of intravitreal injections or complex regimens of topical polypharmacy.

Ambati has also been recognized for his teaching excellence by a University of Utah Resident Research Mentor Award and by serving as an Instructor at the Harvard Cataract Course for 2009 and 2010. His community and overseas service is consistent and giving: he has conducted free eye screenings in New York, Georgia, and Utah, and served as a volunteer eye surgeon with ORBIS, Sight for the Sightless, and Help Mercy International.”

July Issue of The Ophthalmologist