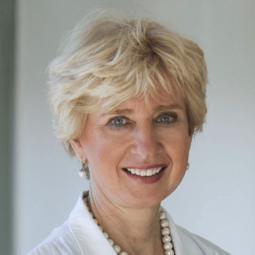 Julia has been at the forefront of some of the most groundbreaking work in the field of ophthalmology. She was one of the first physicians in the US to perform early intravitreal injections of anti-VEGF medications, and led investigations into their use, and novel steroid formulations, in retinal diseases. She has served as surgeon-investigator in many of the pioneering trials for new therapies to treat blindness, including the development of the ARGUS II chip for retinitis pigmentosa and gene therapy. With her colleagues, she has developed new public health approaches for reaching underserved populations, including telemedicine. She has led Wills Eye Hospital for more than a decade and is the first and only female chair of a top-three US eye department. Her trailblazing work and numerous contributions to the retina subspecialty and the field of ophthalmology at large have resulted in significant recognition, including being named Wilmer Eye Institute’s first female chief resident early in her career. She has received numerous awards from the AAO, as well as been honored by the ASRS, EURETINA, Women in Ophthalmology, the Retina Society, the Macula Society, Rolex, the Society of Heed Fellows, the Philadelphia Medical Society and Associated Services for the Blind.

Goals for the next 10 years?

“As gene therapy, telemedicine, AI and deep learning offer exciting new possibilities in medicine, I hope to lead Wills Eye Hospital further into these fields as the world’s home for research, innovation and advancement in curing eye disease. I also aim to escalate mentoring and training future generations of ophthalmologists, inspiring them to achieve as surgeon-scientists and leaders.”

What’s the future of the retina specialty?

“Breakthroughs in gene and stem cell therapy will provide immense opportunity for advancing medical and surgical approaches to eye disease, and fighting degenerative retinal disease, while big data, telemedicine, and analytical advancements in artificial intelligence and deep learning will enhance public health and lift our level of evidence-based medicine.”

Nominator comment: “Leader of many pivotal clinical trials in retina, and one of the few women leading an eye hospital.”

Championing the Will of Wills