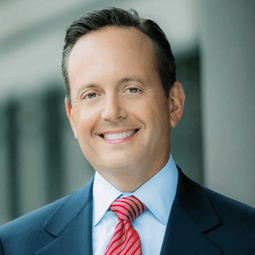 Brent is a significant player in the pharmaceutical industry – and has been for some time, having served as President of Global Consumer Health Care at Schering-Plough, CEO of Bausch + Lomb, and CEO and President of Forest Laboratories. Forest was acquired by Actavis in July 2014; Brent became CEO and President of the combined organization. Nine months later, Actavis had acquired Allergan, and in July 2015, Actavis changed its name to Allergan.

But Brent isn’t all about acquisition and integration. One nominator stated, “His passion and commitment in eyecare is clear. He is prominent at key ophthalmology congresses where he spends most of his time talking with and listening to ophthalmologists’ needs and ideas.” Acquisitions and collaborations within eyecare include devices (Oculeve/TrueTear), new biologics (Molecular Partners/ DARPin) and even CRISPR gene editing (Editas/CRISPR) – and his high ranking in this year’s Power List – suggest both statements are true.

July Issue of The Ophthalmologist