Neurotrophic keratopathy can be a devastating disease (See Box 1. Neurotrophic keratopathy pathology). Lost corneal sensation may lead to corneal scarring, ulceration and thinning, which can lead to corneal perforation and vision loss. It’s a debilitating condition for patients, and doctors have limited treatment options. Multiple ‘temporizing’ treatments try to decrease the chance of infection, ulceration and scarring, such as ocular lubricants, topical antibiotics, autologous serum drops, contact lenses, amniotic membrane grafts, and tarsorrhaphy. But none restore corneal sensation or the ability of the eye to respond appropriately to stimuli and maintain a healthy ocular surface. Furthermore, patients with neurotrophic keratopathy do poorly with corneal transplantation to replace the damaged tissue, because the same condition will recur in the corneal graft resulting in failure.

The traditional standard of care for severe cases is to suture the eyelids together to protect the surface of the eye – a disfiguring procedure, which at best limits the patient’s field of vision and may lead to functional blindness if the entire palpebral aperture is closed. Some patients end up with permanently closed eyelids because corneal decompensation recurs upon re-opening. A novel surgical treatment has been described – corneal neurotization (1) – but the original techniques involve a significant undertaking. They involve either a coronal (ear-to-ear) incision with peeling the scalp and forehead tissues down to the level of the eye socket, or use of a nerve autograft harvested from a patient’s leg. Why? To route supraorbital and supratrochlear nerves from the contralateral side, tunnel them across the bridge of the nose, and to the corneoscleral limbus of the affected ‘anesthetic’ eye (1). These techniques for corneal neurotization have demonstrated successful outcomes – patients developed improved corneal sensibility, corneal health, and vision in some cases. But the means of getting there involve quite an invasive surgery with potential for significant donor site morbidity.

The sentinel patient with neurotrophic keratopathy who sparked my interest in this procedure presented to my clinic with severe corneal decompensation. In the four months following a retinal detachment repair surgery, she developed a non-healing corneal epithelial defect, thinning, and progressive loss of vision in her left eye despite maximal medical therapy. With hand motion vision, she was miserable and desperate. I wasn’t satisfied that there was nothing we could do besides suturing her eyelids together, and after extensive research to see if any other options were in existence, I stumbled across the paper by Terzis et al (1), which described the original corneal neurotization technique – four years after it was published.

My cornea colleague and I decided to perform the procedure using a slightly modified technique – see Figure 1. The surgery took five hours and involved a large incision and extensive surgical manipulations. Fortunately, the patient ended up doing very well; her corneal sensation was restored with complete healing of her epithelial defect and improved visual acuity from hand motions to 20/30. I was able to open her eyelids, which were initially sutured together to protect her cornea (2). We were only the second center in the US to perform corneal neurotization; more groups have now reported performing similar procedures (3)(4)(5).

It was a revolutionary concept for me because it worked so well, but I thought there had to be a better – and less-invasive – way. One group reported using a sural nerve autograft to restore corneal sensation through coaptation with the supraorbital or supratrochlear nerves (4)(5). Although less invasive than the procedure we and Terzis et al had performed, I still wanted to find an option that would avoid another donor site morbidity. My goal became creating a less invasive procedure that would still provide good results.

Surgeons use cadaveric nerve grafts to repair nerve injuries in other areas of the body, so I thought why not use them to restore corneal sensation? It would circumvent the need for more invasive surgery to harvest grafts from the patient. Using de-cellularized and processed cadaver nerves (AxoGen, Alachua, Florida), I’ve performed the corneal neurotization procedure in five patients (Figure 2). Within three months of surgery, most patients demonstrated restoration of corneal sensation and improved corneal healing.  Some of the patients actually noted that they could feel eye drops in the operative eye for the first time since developing neurotrophic keratopathy. Using a Cochet-Bonnet esthesiometer we were able to track their progress objectively, and we’re thrilled with the outcomes – our results have been submitted for publication. We’re also starting a prospective study to examine and further understand the outcomes following procedure.

We’ve also developed a second minimally-invasive technique – harvesting nerves using an endoscopic approach. This procedure involves making two small incisions behind the hairline – rather than a coronal incision – as well as a small eyelid crease incision (See Box 2. An endoscopic approach).First, we demonstrated the feasibility of using an endoscope for supraorbital nerve transfer to the corneoscleral limbus in two cadaver heads (6). We’ve also performed our endoscopic procedure in an 83-year old female patient with neurotrophic keratopathy from herpetic disease (7) (Figure 3). The affected eye had a visual acuity of hand motion at one foot, and a persistent corneal epithelial defect with dense corneal stromal scarring. Five weeks after the surgery, her epithelial defect had healed completely; and within three months of surgery we were able to demonstrate improvement in corneal sensation.

The merits of minimally invasive surgery

Both of our minimally invasive approaches have multiple advantages over the originally described corneal neurotization techniques. They’re less invasive – you’re not ‘scalping’ the patient or performing additional surgery elsewhere on the body to harvest a segment of nerve.

Another benefit of a minimally invasive procedure is that it makes corneal neurotization more accessible to ophthalmic surgeons who may not be as comfortable with previously described approaches. If there is a procedure that more ophthalmologists can perform, then more patients will be likely to receive treatment. We’ll also be able to intervene earlier as patients will be more willing to undergo the procedure, rather than waiting until their disease becomes visually threatening. Currently, ophthalmologists who are aware of the procedure consider corneal neurotization a very morbid surgery. I am trying to change this perception – the minimally invasive procedures can be performed safely, with low complication rates, and are definitely within the scope of many ophthalmologists with proper training. The endoscopic approach is more technically challenging than grafting cadaveric nerves as it requires familiarity with using the endoscope, requires specialized equipment, and meticulous dissections in a small tunnel. Right now, corneal neurotization using cadaver nerve grafts is probably more reproducible, and I hope that in the future it might be picked up by more surgeons. I want to see corneal neurotization become a new paradigm in the management of neurotrophic keratopathy, and I want to see more patients cured from this disease.

Ilya Leyngold is Assistant Professor of Ophthalmology at Duke University School of Medicine, Durham, North Carolina, USA. He specializes in cosmetic and reconstructive surgery of the eyelids, orbit, lacrimal system, and face.

Ilya Leyngold is Assistant Professor of Ophthalmology at Duke University School of Medicine, Durham, North Carolina, USA. He specializes in cosmetic and reconstructive surgery of the eyelids, orbit, lacrimal system, and face 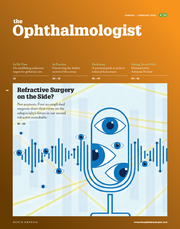